Hair transplantation history started several decades ago in Japan, through research carried out by Japanese doctors. But the milestone of modern hair transplantation was marked in the ‘50s through Dr.Orentreich΄s scientific research. A brief historical overview will cover all the significant landmarks: 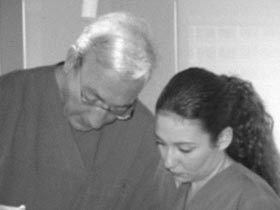 Japanese surgeon Sasagawa was the first to present the idea of hair follicles transplantation.

The second hair transplantation attempt was made by the Japanese dermatologist Dr. Okuda, through his revolutionary – for the contemporary medical conditions – approach. He suggested and performed the auto-transplantation, using grafts, and setting a precedent to the way hair transplantation would be practiced in the following decades.
But due to the political and social circumstances of the era (World War II), there was no room for further research.

Japanese doctors Tamura and Fujita made similar attempts as well.

The American Dr. Norman Orentreich studies the transfer and implantation of hair from the back and sides of the scalp to the thinning areas. In 1952 he performs his first surgery. In 1959 he publishes his paper ‘’Autografts in Alopecias and other Selected Dermatological Conditions”. Dr. Orentreich΄s studies proved that transplanted hairs maintained their genetic resistance to hair loss –regardless of the area they where reimplanted- and continued to grow throughout a lifetime. This unique characteristic was the center of the theory of Donor Dominance, which is the foundation of modern hair transplantation and is described briefly as follows:

“Transplanted hair follicles preserve their genetic resistance to hair loss and continue to grow at the recipient area throughout a lifetime“.

All hair transplantations performed concern grafts of quite big diameter, which consist of 20-30 hair follicles and therefore lead to unnatural results.

The size of the grafts is reduced to 12-20 hair follicles per graft, but of course even these results are not aesthetically satisfactory.
The innovative techniques of mini and micro grafting developed in 1981-1984, provided natural and fine aesthetic results.

We should underline that BERGMANN KORD was the first hair clinic to carry out a hair transplant procedure in Greece (micro transplantation).

This website uses cookies to improve your experience while you navigate through the website. Out of these, the cookies that are categorized as necessary are stored on your browser as they are essential for the working of basic functionalities of the website. We also use third-party cookies that help us analyze and understand how you use this website. These cookies will be stored in your browser only with your consent. You also have the option to opt-out of these cookies. But opting out of some of these cookies may affect your browsing experience.
Necessary Always Enabled
Necessary cookies are absolutely essential for the website to function properly. This category only includes cookies that ensures basic functionalities and security features of the website. These cookies do not store any personal information.
Non-necessary
Any cookies that may not be particularly necessary for the website to function and is used specifically to collect user personal data via analytics, ads, other embedded contents are termed as non-necessary cookies. It is mandatory to procure user consent prior to running these cookies on your website.
SAVE & ACCEPT
Send this to a friend
For your Information : Hair Transplant History
Page URL : https://www.kordhairclinics.gr/en/hair-transplantation/hair-transplant-history/