The medical term for hair loss is Alopecia and may either be temporary or permanent. 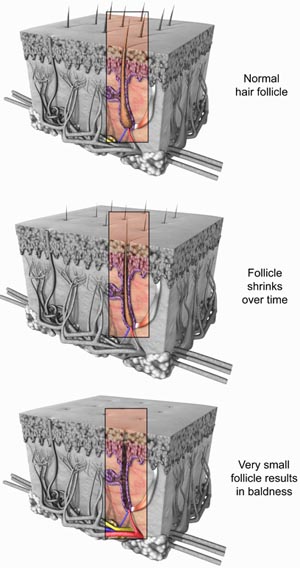 Androgenetic Alopecia is the most common type of male hair loss and is responsible for 95% of alopecia cases. It also affects women though with differences compared to men (Female Pattern Hair Loss).

It occurs as a result of the long-lasting impact of androgens (male hormones) on people with genetic predisposition to hair loss. The prolonged and continuous effect of the androgens on susceptible hair follicles is the factor that leads to their shrinking and subsequently to hair loss.

Hair thinning is attributed to the following parameters:

In the kernel of every human cell there are 46 chromosomes appearing in pairs (one coming from the mother and one from the father). The 22 of them are called autosomes and are the same for both genders. The 23rd pair of chromosomes (the sex chromosomes) is different in men and women. 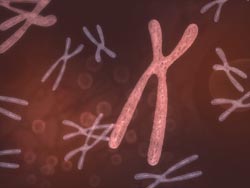 Each chromosome includes thousands of genes, which appear in pairs and originate from parents. At the gene pairs, the one called “dominant” defines the inherited trait.

As for hair loss, the dominant gene comes from the mother. That means that if there is a hair loss history of heredity from the mother’s side, this will be transferred to the son. But if the father has a genetic predisposition, hair loss heredity isn’t always certain for the descendants.

However, hair loss genetic predisposition doesn’t necessarily mean that hair loss will definitely appear or that it will be expressed in the same way as it did to the older members of the family.

Genetic reasons are therefore a crucial factor stimulating hair loss. Genetic predisposition is responsible not only for the appearance of hair loss but also for the rate of its progress during one’s lifetime. If genetic predisposition exists, then hair loss is precipitated by the action of androgens and aging. In short, thinning arises due to the organism’s insufficiency to produce the necessary amount of new, healthy hair.

The endocrine system in man consists of a group of glands (hypophysis, adrenals, hypothalamus, thyroids and parathyroids), that lie in several parts of the human body. Their role is to produce hormones, which regulate the activity of other organs and tissues in the body. Ovaries, testicles and pancreas play a significant part in hormonal activity as well.

Hormones are biochemical substances that circulate in the blood and regulate the physiological needs of the organism.

Androgens are hormones produced in men and in smaller quantities in women. In men, androgens are responsible for the characteristics of virility. The prime representative of androgens is testosterone.

In order to perceive the mechanism of action of androgens, we should refer to the basic characteristics of hair: Hair grows in naturally occurring groups of 1-4 hairs, called Follicular Units.

Those consisting of one hair are allocated along the frontal hairline and as we move towards the inner part of the scalp, hair follicles constitute groups of 2, 3 or even 4 hairs.

Follicular units are complete biological units that comprise nerves, blood vessels, sebaceous glands, collagen and the small muscle arrector pili. Each follicular unit has a predetermined genetic definition. In cases of androgenetic alopecia, hair follicles on the front and top of the scalp are susceptible to the hormone dihydrotestosterone (DHT), derivative of testosterone. Testosterone, with the help of the enzyme 5-a reductase is converted into DHT, which acts on hair follicles receptors and provokes changes in their function. The prolonged action of DHT on the susceptible hair follicles leads to their progressive miniaturization.

As a result, hair follicles get gradually shrinked in every hair life cycle. Some of them become inactive while others lose their ability to produce healthy hair. They start producing light-colored miniaturized hair. This phenomenon is called hair miniaturization. Hair loss is the final stage of hair miniaturization.

This mechanism helps us realize what really happens when someone experiences hair loss for the first time: The thinning look is not really due to hair loss but due to the progressive reduction in hair density (miniaturization).

Generally speaking, we could say that DHT΄s action shortens the Anagen Phase, the period in which hair is growing. As a consequence, hair enters the Telogen Phase earlier. At that period, hair stops growing, gets weaker and finally drops. It is also important to underline that men suffering from hair loss do not necessarily have higher levels of testosterone or other androgens in their body.

The truth is that their hair follicles are more susceptible and vulnerable to the action of androgens than those of other men and in some cases they have more DHT receptors or high levels of 5-a reductase. For instance, men with low levels of 5-a reductase do not experience androgenetic alopecia. Conclusively, androgens cause hair loss only in combination with heredity. Another significant point is the correlation of hair loss and excessive oiliness. Sebum contains DHT, so any excessive secretion of sebum keeps higher levels of DHT in contact with hair follicles, reinforcing its action on them.

The precise time of hair loss beginning as well as its progress is different among persons. As it was previously mentioned, heredity and androgens have a significant impact on that. Age is the catalyst in hair loss, as the susceptible to androgens hair follicles must be exposed for a long period to their action- actually for years-in order to start weakening. But even in cases where there is not hair loss heredity, aging weakens hair: Some of the hair follicles become inactive and stop producing hair, contributing therefore to hair loss. But even in this case, the donor area resists aging, thus enabling to older men to move ahead to a hair transplantation procedure.

Send this to a friend